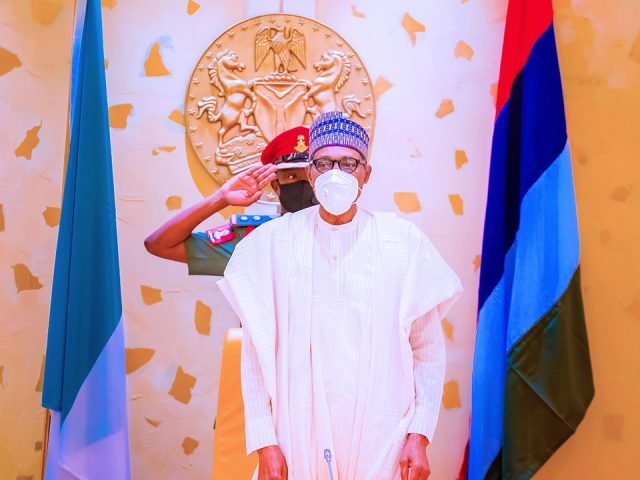 After what appears a lull in Civil Society Organisations (CSOs) activism in the country, a coalition of 127 CSOs under the Joint Action Civil Society Coalition/Nigeria Mourns Secretariat, yesterday, petitioned President Muhammadu Buhari to, as a matter of urgency, stop the escalating insecurity in the country. They further raised the alarm that the first quarter of 2021 has witnessed all-time high fatalities and atrocious incidences across the country.

The petition titled ‘State of the Nation: Stop the bleeding, end carnage now, called for the resignation of the President while urging all Nigerians to register their displeasure with the state of affairs across the country by participating in a series of mass actions from May 26, to commemorate the 4th National Day of Mourning and Remembrance of Victims of Mass Atrocities on May 28 and further boycott all Democracy Day activities on May 29, in protest of the deplorable state of insecurity in the country.

The statement reads in part: “Following a sharp increase of 43 per cent in mass atrocities, Nigeria has continued to experience a decline in security across the nation. In the first quarter of 2021 (January to March), we recorded an all-time quarterly high of almost 2,000 fatalities from mass atrocities incidents across the country. Last week, across the six geopolitical zones, there were escalated combustions of violence resulting in even more deaths.

“In our last joint statement issued in February 2021, we had catalogued the assortment of mass atrocities plaguing the country. We had also demanded that where the President fails to fulfil his constitutional duties, that he steps aside, or, that the National Assembly initiates impeachment proceedings against him on grounds of gross misconduct as provided for in Section 143 of the 1999 Constitution of the Federal Republic of Nigeria.

“We are appalled to note that despite our strongly-worded statement, President Buhari’s government has failed to heed our call to fulfil his role as Commander in Chief of the Armed Forces and Nigeria’s democratically elected President. We are therefore left with no other option than to take action to drive home our call to the government and pull the nation back from the path of destruction.”

The group listed among many others failure of the government to include: “Gross injustices by President Buhari’s government against the Nigerian people such that peaceful protesters are threatened and attacked by the government’s security agents while terrorists carrying out mass murder, rape, maiming and kidnapping of Nigerians are feted and granted ‘amnesty, which is tantamount to funding and supporting terrorists, encouraging murder and decimation of gallant troops; terrorist herder attacks on unarmed farming communities and reprisal attacks in the face of government inaction to bring the terrorist herdsmen to justice; large-scale terrorist attacks in the North West irresponsibly tagged by the government as ‘banditry’ in a bid to downplay their criminality; industrial-scale kidnappings across the country; inter-ethnic violence and menace of ethnic militia; and not ending impunity for abuse of power and sectionalism through appointments by balancing the need for competence with the federal character principle.”

This is coming after some hoodlums yesterday attacked the Ubani Market Police Station named after the former IGP, Mike Okiro, on the outskirts of Umuahia, Abia State capital and setting it ablaze around 9:00 a.m. The police station was established by the immediate past governor, Theodore Orji, to provide security for traders at the Ubani Ibeku market and other suburbs.

According to sources, no life was lost, though a police officer was injured while repelling the hoodlums. The incident left many users of Umuahia-Uzuakoli-Ohafia road stranded as the exchange of firepower between the gunmen and police lasted.

It was gathered that the hoodlums razed exhibit cars parked in the premises of the police station. Attempts to release suspects in police custody failed as operatives were said to have quickly evacuated suspects to other police stations within the capital city. They were only left with the car exhibits, some of which can’t be towed from the police facility.

There was a heavy presence of security agents thereafter, causing apprehension among residents.

The Abia police spokesman, Geoffrey Ogbonna, confirmed the incident. He said the hoodlums came in one Hummer bus, a Toyota Sienna and a motorcycle. Ogbonna, who debunked the report that the police station was razed, confirmed a policeman sustained injury.

He said no gun was stolen from the station through the hoodlums entered the facility and burnt some of the documents in the offices.

He added that two vehicles and two motorcycles within the premises of the station were burnt.

On the presence of security personnel patrolling the state capital, the police spokesman said it was to forestall any further attack as intelligence revealed the hoodlums were heading to another location to carry out another attack.

Yesterday’s attack is the fifth in the state lately after those of World Bank Estate Aba, Isiala Ngwa South LGA, Uzuakoli in Bende LGA and Nkporo in Ohafia LGA were similarly attacked with casualties.
BUT in Akwa Ibom State, five police officers and the wife of an officer were killed by gunmen during an attack on Divisional Police Headquarters, Odoro Ikpe in Ini LGA yesterday evening. Although the state Police Command was yet to issue an official statement on the incident as at press time yesterday, the Police Public Relations Officer in the state, Odiko MacDon, confirmed the incident to newsmen. MacDon said facilities, vehicles, and other valuables were also destroyed by the gunmen.

“Yes, there was an attack on the Divisional Police Headquarters, Odoro Ikpe. Six persons, including five officers and a wife of an officer, were killed,” the PPRO said.

This is coming a day after gunmen killed 12 policemen in Rivers and Akwa Ibom states. Already, the police have launched a desperate search for eight AK-47 rifles stolen by gunmen that killed seven of their operatives in Rivers at the weekend. Eight rifles were snatched from victims of the attack, which occurred at two police checkpoints and two divisional headquarters.

At the C4I checkpoint at Choba where the gunmen killed an Assistant Superintendent of Police (ASP) and an Inspector, two rifles were snatched with a patrol van set ablaze by the hoodlums. At the checkpoint in front of the Rumuji Divisional Headquarters, where the armed men beheaded another ASP and an Inspector, the police lost two AK-47 rifles.

A special constable was said to have escaped with a bullet that hit his chest at the Rumuji checkpoint. The gunmen further stole four AK-47 rifles when they attacked the Elimgbu Division where they killed two ASPs and an Inspector.

The troubled Commissioner of Police, Eboka Friday, it was gathered has deployed a special tactical team to locate the hideouts of the fleeing gunmen and retrieve the rifles. The team was said to be combing the waterfront and bushes surrounding the state capital and border communities. The attack occurred around 8:30 p.m. on Friday before the 10:00 p.m. curfew imposed on the state by Governor Nyesom Wike.

Police spokesman, Nnamdi Omoni, confirmed that the Commissioner of Police has launched a manhunt for the perpetrators with a view to apprehending the culprits and bringing them to justice.

He said: “So far, the command is relatively calm and the Commissioner of Police is currently in a meeting with his team, as security has been further strengthened in all the police formations in the state, including other critical public and private infrastructure.

LAST week alone, 85 persons were killed and 17 kidnapped in various violent attacks across the country. The figures were compiled using a review of newspaper reports, interviews with victims’ families, and in some cases, confirmation by public and security officials.

MEANWHILE, there was a scare among residents of Onitsha, Anambra State, yesterday as a truck conveying live bullets fell into a ditch, disgorging its content on the road. The Mercedes Benz 911 truck, which fell along Awka road in the early hours of Sunday, had the cartons of the bullets spill into the drainage when it skidded off the road.

The contents made early morning worshippers raise the alarm, which attracted the presence of heavy security men who later cordoned off the area. According to an eyewitness, the discovery of the ammunition amid the worsening security situation in the Southeast has put everyone on the alert.

Anambra State Police Public Relations Officer, Ikenga Tochukwu, confirmed there was a lone accident at the spot. On the cartons of bullets being conveyed by the truck, he said he had not been properly briefed on the situation. However, he assured investigation had commenced into the matter.

POLICE TAKE OVER AT JUNE 12 PROTEST IN LAGOS