Fighters fire salutatory rounds in the air during the funeral of General Wanis Bukhamada, commander of the “Saiqa” (Special Forces) of the self-proclaimed Libyan National Army (LNA) loyal to strongman Khalifa Haftar, in the eastern city of Benghazi on November 1, 2020. (Photo by Abdullah DOMA / AFP) 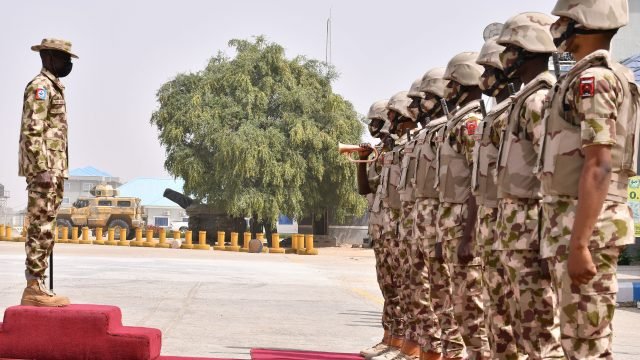 Army spokesman Mohammed Yerima in a statement on Sunday said the arrest was made by troops of 3 Brigade.

Yerima said the suspected insurgents were arrested during an operation conducted by the troops to flush out criminals in the state.

“In an ongoing effort to flush out all forms of criminality within its Area of Responsibility, troops of 3 Brigade Nigerian Army have arrested 13 suspected Boko Haram terrorists around Filin Lazio, Hotoro axis of Kano State on Saturday 8 May 2021,” Yerima said.

“The general public, especially residents of Filin Lazio Hotoro, are enjoined to go about their lawful businesses as security forces are on top of the situation.”

Yerima said the ongoing operation is predicated on the need to apprehend criminals who may want to hibernate in any part of the State.

He also advised residents in the state to be vigilant and report strange movements to the relevant security agencies.